News and features/ Features/ WIN Motorsport Back on…
Back 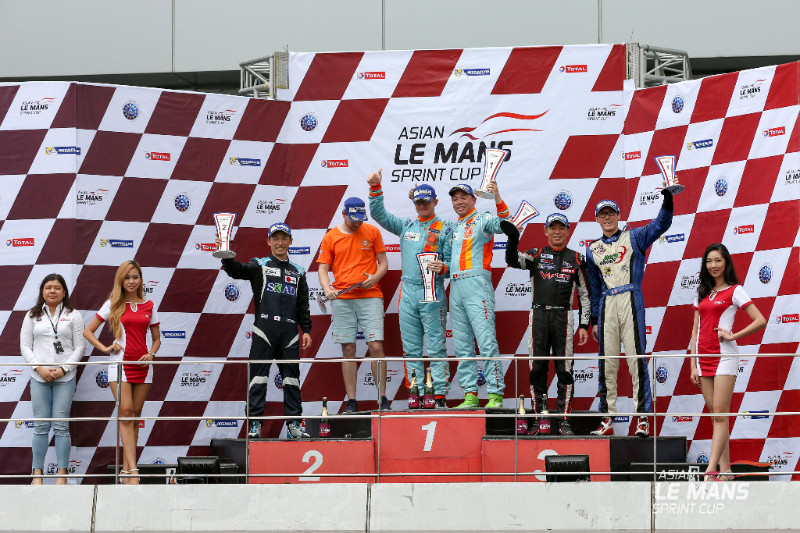 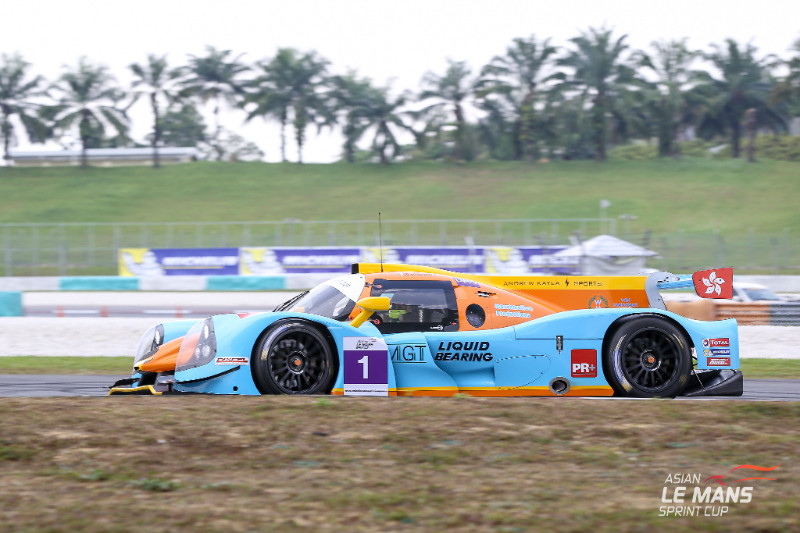 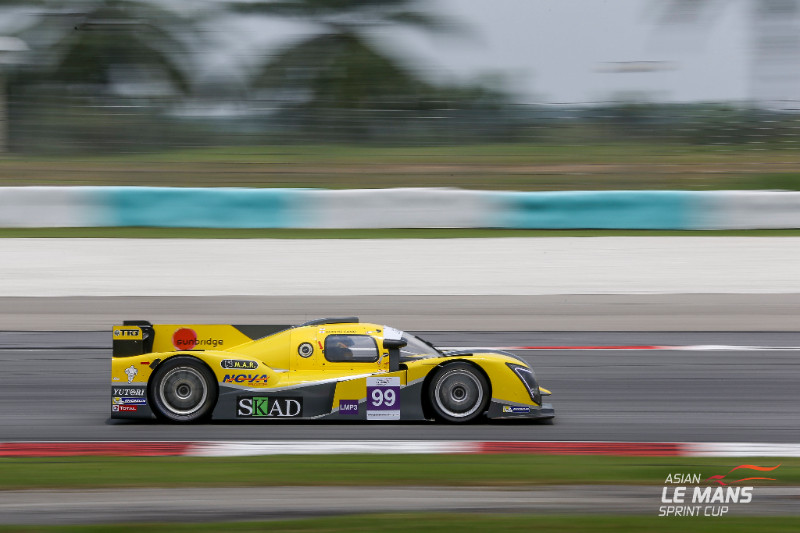 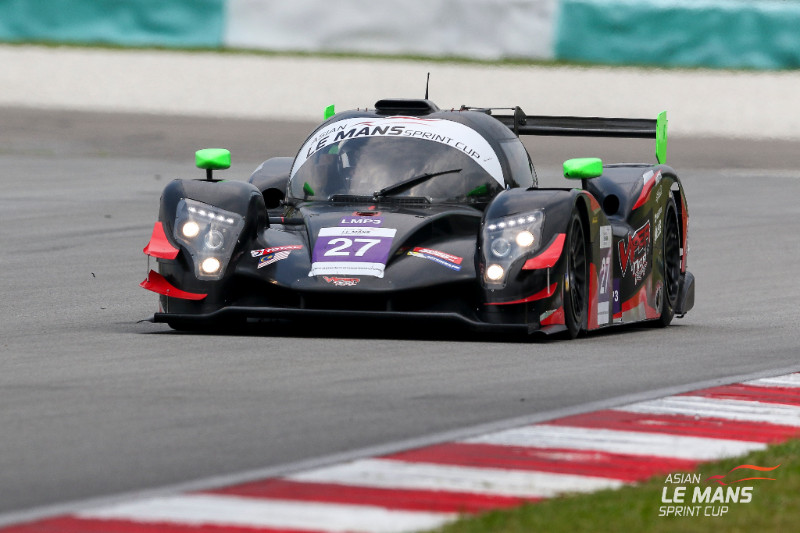 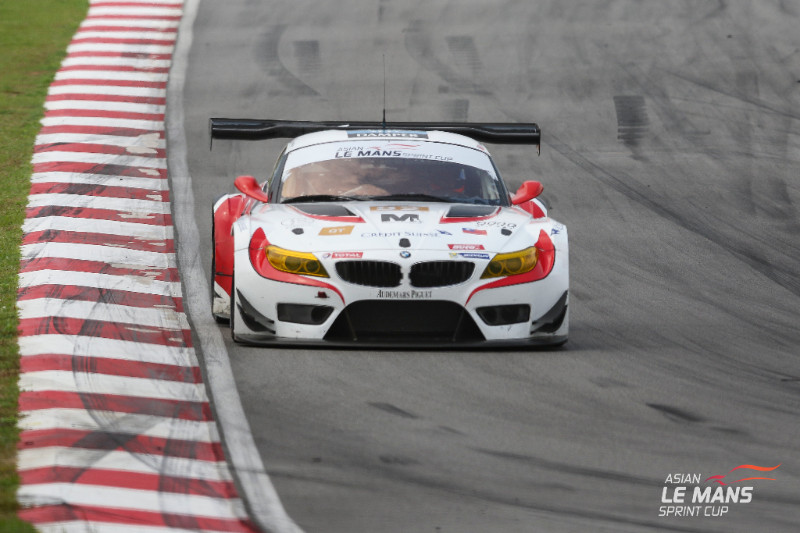 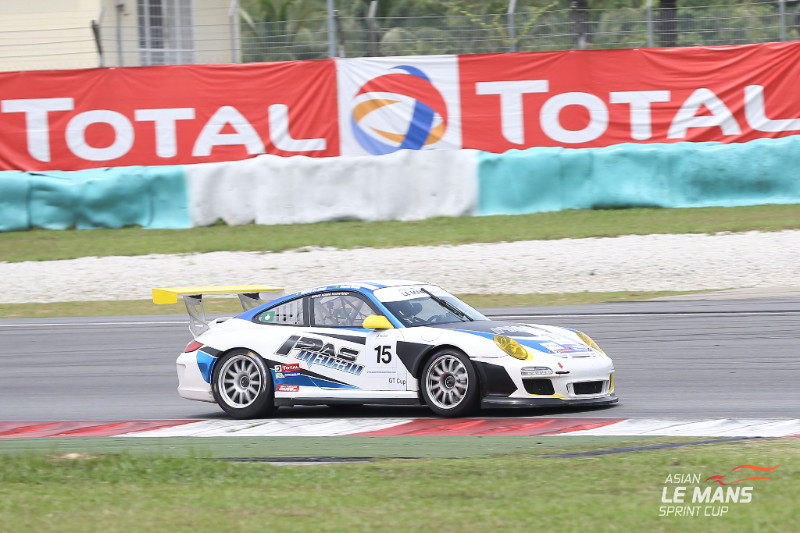 The WIN Motorsports combination of William Lok and Davide Rizzo have taken their Ligier JS P3 to victory in Race 2 of the second round of the Asian Le Mans Sprint Cup. The race was held today at the Sepang International Circuit.

Race 2 Qualifying:
Qualifying for today’s race was held on Saturday morning immediately following first qualifying session. This meant that Infinity Racing Engineering, were also forced to miss second qualifying after suffering problems in the first session. As a result they were forced to start from the rear of the grid again in their ADESS03.

Qualifying on pole was WIN Motorsports Davide Rizzo in the Ligier JS P3, with race one winner Shinyo Sano lining up next to him in the TKS Ginetta LMP3.

As a result of his accident in Race 1, Kurt Hill in the Eurasia Motorsports Ligier JS 53-EVO was not able start in Race 2.

Unfortunately the Arrows Racing Lamborghini Gallardo GT3 that performed so well in Race 1, had a mechanical problem on the way to the grid and was not able to make the start of the race.

Race:
With dark clouds looming, teams were faced with the prospect of a rain during the race. Fortunately the threat cleared and the race was dry.

Pole sitter Davide Rizzo in the WIN Motorsports Ligier JS P3 got away perfectly at the start, and was quickly pulling away. His aim was to build a solid gap to the other LMP3 enteries before he handed the car over to his team mate William Lok.

Behind him, it was Ollie Milroy in the Team AAI  BMW Z4 GT3 that capitalised on a strong start to get ahead of Shinyo Sano in the TKS Ginetta LMP3 and sit in second after turn one. Nick Foster also got a blistering start in the Team NZ Porsche 997 GT3 Cup, climbing up as high as 4th place on the first lap.

Sano and Milroy were locked in a tight battle with Sano unable to find a way around the BMW. On lap 6 however, Milroy let the LMP3 of Sano through. Running in the GT Class, Milroy does not need to fight hard with Sano who is racing in the LMP3 Class. He instead chose to focus on his own race. At this point Sano had dropped 24 seconds behind Rizzo who had been running in clean air. He pushed hard from there to close the gap, but Rizzo was a man on a mission setting increasingly quick lap times.

Ahead of the compulsory pit stops, Rizzo had pulled out a gap of over 40 seconds to Sano.

Infinity Racing Engineering the first to take advantage of the pit window open, bringing in Khoo and putting Dominic Ang into the seat of the ADESS 03.

Meanwhile, in the GT class Milroy was driving very well to comfortably build a strong gap to the other GT runners before pitting, and handing over his BMW Z4 GT3 to his Team AAI team mate Chi Huang. Due to their shorter compulsory pit stop time, the BMW came out in front of the TKS Ginetta LMP3, but Sano quickly took the place back again.

Rizzo pitted on lap 16 and handed over the WIN Motorsports Ligier JS P3. William Lok took the wheel and came out over a minute ahead of Sano.

While Sano set about closing the gap to the WIN Motorsport car in front, the TKS team were advised they were under investigation for insufficient pit stop time. The officials found they did not stop for the correct length of time and gave the team a 2 second stop and go penalty. This saw Sano drop even further behind Lok.

In the GT Cup class, the battle between the Porsche 997 GT3 Cup cars from Team NZ and PAS Macau Racing was heating up with Wong Kian Kuan closing on Graeme Dowsett who appeared to be struggling with his car.

The battle for third place was intensifying with Dominic Ang in the Infinity Racing Engineering ADESS 03 rapidly closing the gap to the Team AAI Team AAI ADESS 03 with Jun San Chen behind the wheel. Ang took third place with less than 10 minutes left in the race. He held the position to claim the third spot on the podium at the finish.

Chi Huang continued to run a clean and consistent race in the Team AAI BMW Z4 GT3, to claim the win in the GT Class.

After comfortably leading the GT Cup Class for much of the race, Team NZ saw a recurrence of the problem that has been plaguing them all week. A problem that increased as the race went on. The problem saw Graeme needing to drop his lap speed significantly to nurse the car home. Wong Kian Kuan in the PAS Macau Racing Porsche took advantage of this to catch and pass the struggling Team NZ Porsche. He was then able to hold onto first place, crossing the finish line to claim victory for PAS Macau Racing in the GT Cup Class.

Despite Sano throwing everything he had into chasing down Lok, he had to settle for second as WIN Motorsport proved to be unbeatable. Lok crossed the line to claim victory, and with it extended the team’s lead in the Championship.

First LMP3: WIN Motorsport – Ligier JSP3
Davide Rizzo
Obviously it was a good result today. The guys worked really hard overnight. They did a really good job to fix the car after yesterday. They had quite a bit of trouble and they made the car perfect. The start was good and after that I just needed to keep pushing to make sure that when I gave the car to William that everything was in a good place. And then he did a good job, so not really much more to say other than thanks to the team for a great job!

William Lok
We have had a really good car today. Yesterday there was a bit too much drama, but maybe today was a bit too little drama! But we had some fun! Over all I am very, very happy. Thank you very much to everyone in the team for their support – it was a late on last night like Davide said – but the car was spot on right away. After yesterday’s race, we had a few issues including a clutch problem which meant it had to be replaced overnight. I am very happy and looking forward to the next round!

Second LMP3:
TKS – Ginetta LMP3
Shinyo Sano
Today was tough. WIN Motorsport are very strong and we had a pit stop time that was an extra 40 seconds so it was a big challenge. At the start I wanted to follow Rizzo but the BMW was just too fast and I could not pass for many, many laps, so then he was gone! On the last lap I felt the car drop power – so I just used the top gear and I just made it over the control line, I was not sure I could do another lap. So very lucky! So thank you, I really enjoyed my race.

Third LMP3: Infinity Racing – ADESS 03
Douglas Khoo
Starting last it was of course a big challenge again, but I made a good start, getting by the Porsche straight away. I was not able to catch the other ADESS in front of us unfortunately. It was a great race, it has been a great weekend really. Fantastic racing, obviously I gave my partner a bit more work to do today, but he drove brilliantly and I am very proud of this team. We have obviously done a lot over the weekend to improve the car so we are very pleased!

Dominic Ang
After Douglas passed the car to me, I just kept pushing to chase the ADESS down as we really wanted to be on the podium again! I managed to pass him on the last few laps, and once I was passed I wasn’t sure there was much more we could do. It was a great weekend for the team. Douglas has kept improving in every session. I have to thank him, and the whole team for the opportunity to race with them this weekend.

First GT3: Team AAI – BMW Z4 GT3
Chi Huang
Today is the first time I have finished with the P1! First I would like to thank the organisers of the Sprint Cup to give us a very good path to enter the Endurance Series. It is our intention to move up and this provides a very good platform for that. Second of all I would like to thank they entire team. The driver is the operator, but behind the scenes there are a lot of unsung heros. Everyone from the team owner to the mechanics – it’s a fast forward version of life! Everything happens so quickly. We live life, but just faster!

Most importantly for me, this event, at this circuit, is very important. A lot of Pros start racing at a very young age – but for me, I started at this age! But everything is possible if you put your heart into it, and then with the right support, and the right event then everything can come together!

Ollie Millroy
I had a good start and got into 2nd over-all after passing the TKS LMP3. I wanted to push at bit to get a good lap in at the start as we had an issue in quali and we wanted to see just what the car could do. I put in a couple of decent laps at the start before settling down and focusing on saving the tyres for when Chi got into the car. It all went to plan really – I don’t think it could have gone better!

Chi is completely new to GT racing so the whole point of this program is for us to work with him to get him up to speed to hopefully do the main Asian Le mans Series. From that perspective it has gone really well. We have spent time working on the data together and continually taking steps forward. Ultimately that’s what this series is about. It’s about taking these guys and introducing them to GT Racing. Getting the used to everything from driver fitness, to the race procedures and the rules and regulations!