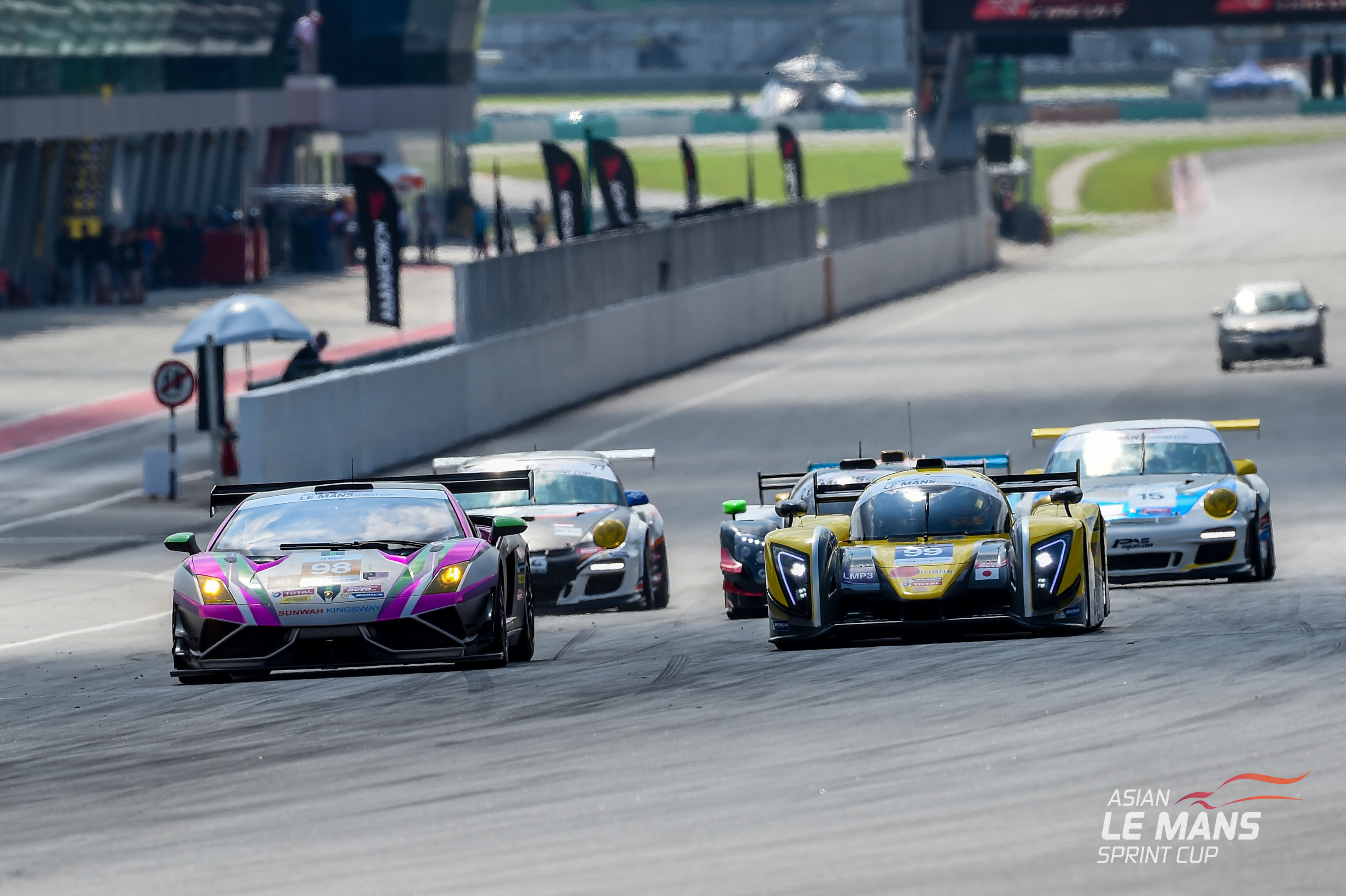 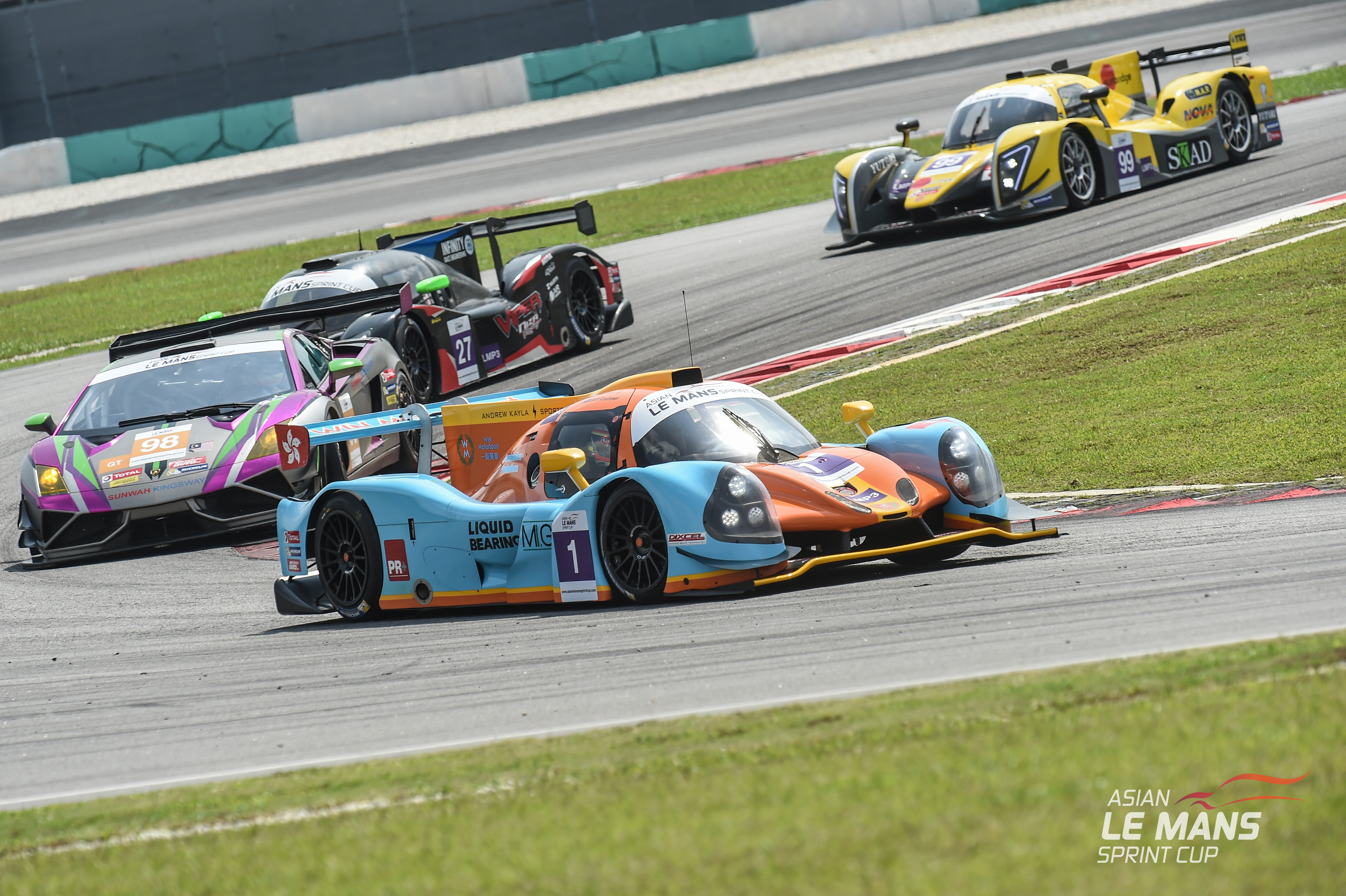 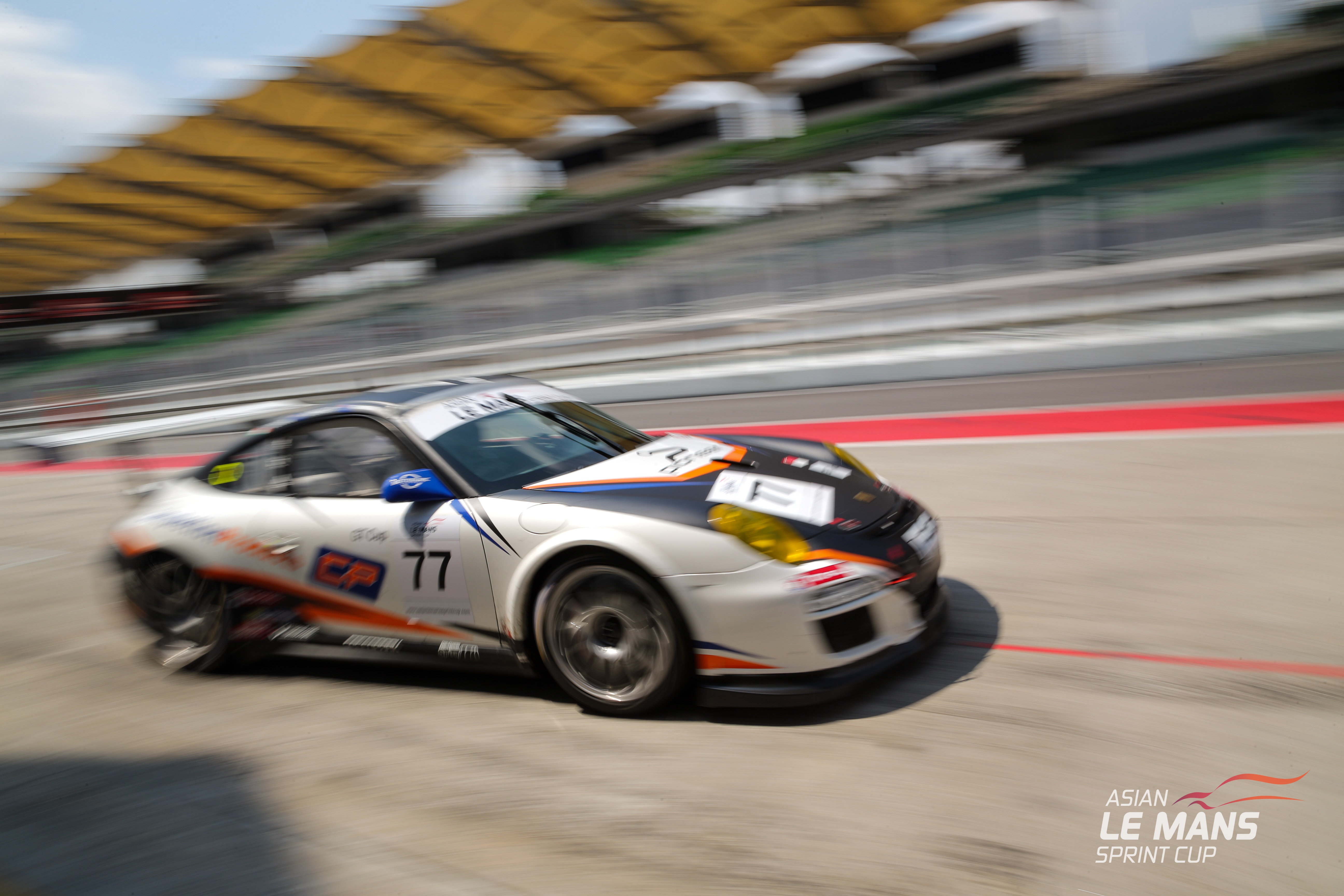 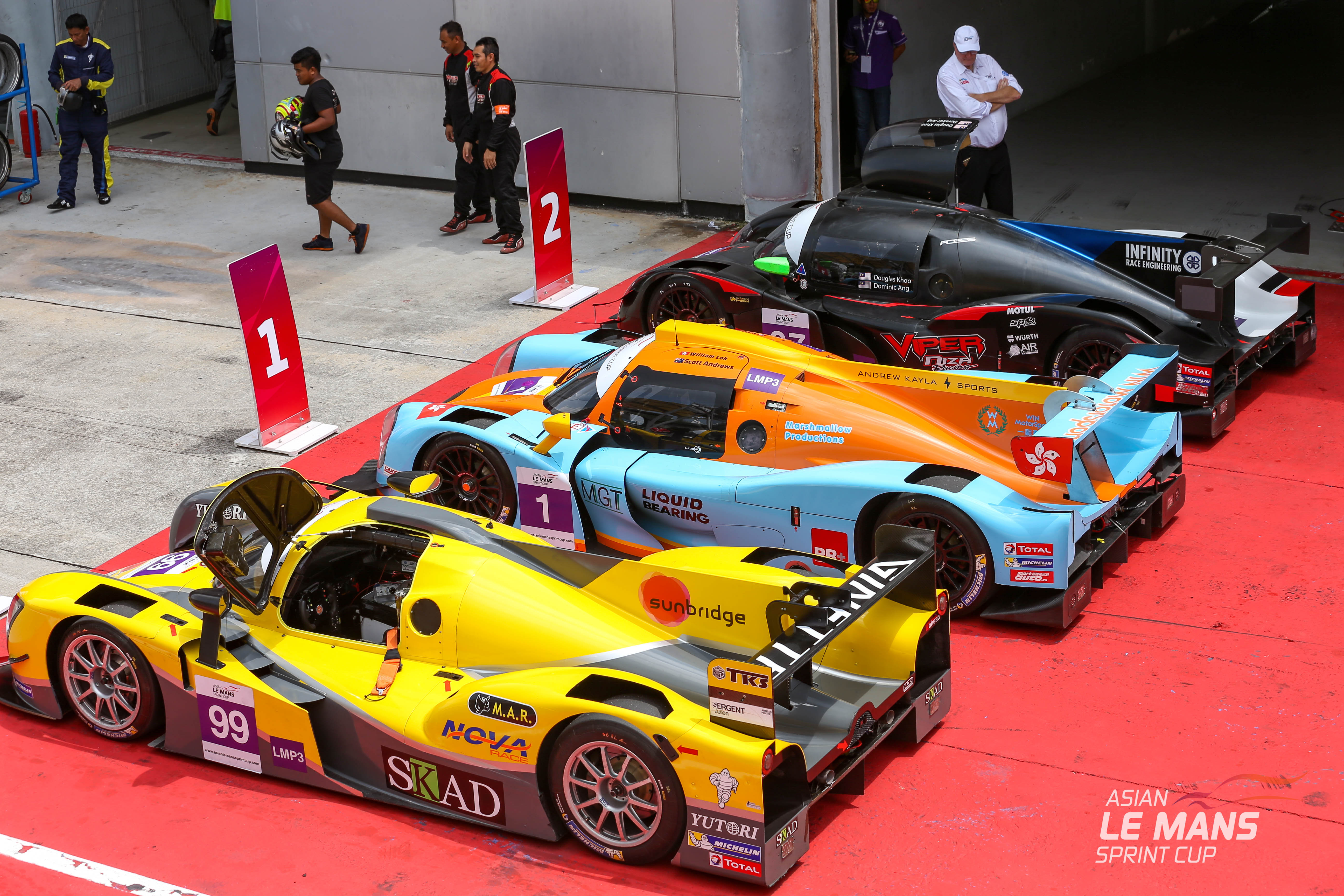 A double pole position for the Championship leading #1 WIN Racing Ligier JSP3 made the qualifying headlines ahead of the double-header of 60 minute races on Saturday and Sunday for the final weekend of the 2017 Asian Le Mans Sprint Cup.

Australian Scott Andrews scored pole position for race one with the fastest lap of either session 2:00.098, enough to beat off the challenge from title rivals Infinity Racing Engineering and TKS in the first 15 minute session.

That scored the WIN Racing team an additional point in their quest to secure the title.

The front row for the Saturday race would be completed by the #27 Infinity Racing Engineering Adess 03 after Dominic Ang recovered from losing his fastest lap for a track limits infringement to go second fastest in the session with a 2:04.289.

There was trouble at the end of the session though for overall title contender TKS and their Ginetta LMP3, solo driver Shinyo Sano pitting and driving the car straight into the garage for a tyre change.  That infringement saw all of the #99 car’s lap times in the session cancelled, the Ginetta would start from the back of the grid for Race 1.

Session 2 to set the grid for Sunday’s race saw WIN Racing team owner William Lok repeating the feat of his team-mate, setting pole position with a lap of 2:04.195.

Alongside him though was not another LMP3 car, there were dramas early in the session for the #27 Adess, now with Douglas Khoo aboard, the car into the barriers at turn one, red flags stopping the session but the session clock stopped with under 10 minutes to go.

That interrupted the plans for all of the remaining cars but there was time enough for Ollie Millroy to put the #92 Team AAI BMW Z4 GT3 second on the grid alongside the polesetting Ligier LMP3 and pole in the GT class with a time of 2:04.652.

The GT Cup class was again a close run affair, the class pole changing hands again during the session, John Curran spinning as he pushed harder still to better the time of the #15 PAS Macau Racing Porsche, Erico de Jesus scoring a deserved class pole with a best lap of 2:13.991, but with all the drivers in class scoring a best time within a second of each other, a title battle looked to be in prospect.

A topsy turvy 60 minute race on Saturday saw titles settled and post race controversy for the penultimate round of the 2017 Asian Le Mans Sprint Cup.

A dominant performance by the #1 WIN Motorsport Ligier JSP3 squad of Scott Andrews and William Lok saw the team take the overall title, Lok winning the drivers title with a round to spare.  That came courtesy of their on-track performance, the Ligier leading the way after the second corner of the race with main title rivals TKS and Shinyo Sano starting from the back of the grid in the #99 Ginetta LMP3 and then forced into retirement at the pit stops mid-race with a starter failure.

Behind the Ligier it was all action as the leading car in the GT class, the Arrows Racing Lamborghini Gallardo GT3 followed up a fast start that saw Marco Jacoboni take the lead briefly through Turn One before dropping back behind both the Ligier and the #27 Infinity Racing Engineering Adess 03 LMP3 started by Dominic Ang.

Both prototypes made it by the Lamborghini quickly but the GT car hung on to the LMP3s and in the second part of the race, with Douglas Khoo aboard the Adess, and Michael Choi in the Lamborghini the tables began to turn, the GT car catching and passing the #27 car for second overall until the closing stages.

Having pulled away in second place the Gallardo suddenly slowed, Michael Choi reporting later that he had detected a puncture as he completed a lap, too late to pit, the tyre fully down by turn two.  The Adess was back up into second place.

By now the Lamborghini’s main title rival in the GT class was already out of the race, Chi Huang having gone into the gravel early on in the #92 Team AAI BMW Z4 GT3, the car eventually getting back to the pits but stopping on Ollie Millroy’s out-lap, the car overheating as a result of the trip through the gravel trap at T5/T6.

The Lamborghini’s dramas weren’t over though, needing a finish to clinch the title the car was directed off track but made its way back to the pits via the internal circuit roads leading to an eventual exclusion, the car having returned to its garage having not passed through the pit entry.

That left a 1,2 overall for the Ligier and Adess LMP3s with the #77 Team NZ GT Cup class Porsche powering home not only to a class win, but a overall podium too!

With reigning Le Mans 24 Hours champion Earl Bamber assisting the team on the radio, Graeme Dowsett started the race in the #77 and was immediately in a fine battle with Wong Kian Kuan in the #15 PAS Macau Racing Porsche, the pair lapping nose to tail in the early stages before the #15 suffered a spin and dropped back.

Consistent pace from Dowsett, followed up in the second half of the race by co-driver John Curran saw the #77 home for a comfortable win, the team and Dowsett set to confirm the class titles on Sunday with a points lead that can only be matched by the PAS Macau squad, but with the Team NZ team having more wins across the season.

Sunday’s final race of the 2017 Asian Le Mans Sprint Cup saw the completion of a near perfect weekend at Sepang International Circuit for the title winning WIN Motorsport squad, their #1 Ligier JSP3 completing a clean sweep of double pole position and double race winning form over the weekend.

That left Lok to start from the rear of the grid but he was soon back in contention for the lead, passed an out of sorts Shinyo Sano in his #99 TKS Ginetta LMP3 after 15 minutes, the Ginetta having led from the start, and went on to take the win comfortably, despite the searing heat of the day.

“I’m delighted with the whole team, and I’m very proud indeed to be bringing the first successful Hong Kong-based prototype team to race, and now title, winning success.  It’s been an ideal building block for all of us in preparing for the Asian Le Mans Series.”

The TKS Ginetta, after retiring from yesterday’s race with a failed starter, managed to fend off the #27 Infinity Racing Engineering Adess 03 of Douglas Khoo through to the pitstops, but the faster pace of the second Adess Driver, Dominic Ang, saw the Ginetta reeled in rapidly, the #27 crew going on to seal second place in the title stakes courtesy of a pair of second place finishes over the weekend with the Ginetta coming home to complete another Asian Le Mans Sprint Cup podium featuring three different LMP3 chassis.

That saw the #77 team confirm the class title, Dowsett taking the driver’s title courtesy of being an ever present with the team throughout their appearances this season.

In the GT class the Arrows Engineering Lamborghini squad and driver Michael Choi took the title despite a weekend to forget, the #98 Gallardo GT3 excluded from Saturday’s race for coming back to the pits after a puncture without taking the pit entry, the car, in the hands of Michael Choi making a good start to Sunday’s race but stopping on the start finish straight after a gearbox issue.

Their title rivals in the #92 Team AAI BMW Z4 GT3 though were unable to take the start on Sunday after overnight engine troubles could not be fixed.  The Lamborghini team, and Michael Choi, taking the teams and drivers titles.

The 2017/2018 Asian Le Mans Series kicks-off on 27th October 2017 with the 4H of Zhuhai. For more details, visit us at www.asianlemansseries.com